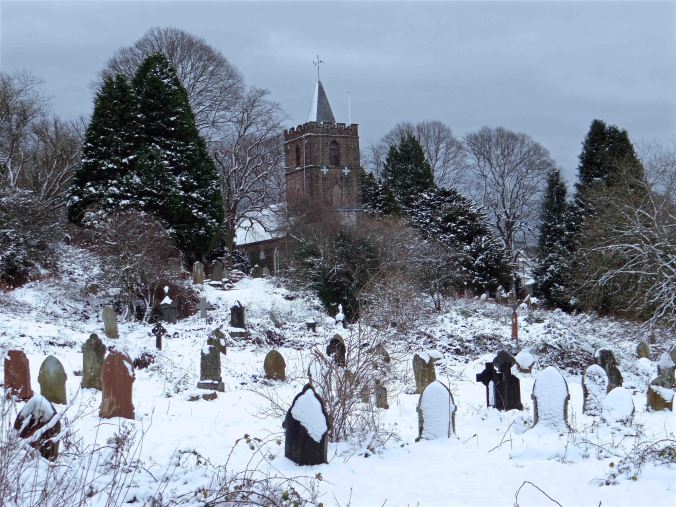 When the ironworks was established in 1789, the resident ironmaster Samuel Hopkins took responsibility for the spiritual needs of the workers. He arranged open air sermons and later held services at Blaenavon House, his home. It was clear, from an early stage, that it was necessary to build a new church. As staunch Anglicans, and also keen to articulate their own identity in the Blaenavon community, Samuel Hopkins and his uncle Thomas Hill of Dennis constructed St. Peter’s Church out of buff local ironstone in 1804. The consecration did not take place until June 1805, when the ceremony was carried out by the Lord Bishop of Llandaff, in front of some 2,000 worshippers, following an Act of Parliament.

An Act ‘for establishing a new church or chapel at Blaenavon’ was passed by Parliament in 1805. It made reference to the fact that the ‘Parish of Llanover is very extensive, and by reason of the establishment, and great increase of the Iron Works there, the inhabitants thereof have become so numerous, that the present vicarage church, and a small chapel called Capel Newydd are not sufficient to contain the inhabitants desirous of attending divine worship therein.’

Some local historians have suggested that St. Peter’s Church was initially a simple, ‘rectangular hall’, with the tower and chancel added much later. This is inaccurate. Baroness Bunsen’s watercolour of the church clearly shows the tower in 1813 and it was similarly depicted on Thomas Deakin’s sketch of 1819. St. Peter’s ‘sister church’ at the Lye Waste in the West Midlands (1813), also has a similar tower, including battlements. Thomas Hill based the design of this church on St. Peter’s (although it was built out of brick instead of stone. The spire also appears to have been an original feature. When a new weathercock was added in 1953, it was claimed that the one it was replacing dated to 1804. This is hard to prove but Baroness Bunsen’s sketch does show a weathercock on top of the spire. A chancel is shown on both the Bunsen watercolour of 1813 and Thomas Deakin’s sketch of 1819. It is also clearly illustrated on the Llanover tithe map of 1844.

St. Peter’s Church was the first church to be built in industrial Monmouthshire in the nineteenth century. The church exhibits many features relating to the local iron industry. Inside the church is a cast iron font dating to 1805, cast-iron pillars supporting the gallery, and cast-iron sills on the threshold. Within the churchyard is a group of five tombs topped with cast-iron lids, these include the graves of Samuel Hopkins, his cousin Thomas Hill II, and mine agent Thomas Deakin. These features give St. Peter’s its identity as a new, industrial church, built by the ironmasters.

Internally, the church tended to have the appearance of a nonconformist chapel and, during its early years was very plain, perhaps to appeal to the local population who were attracted to the nonconformist protestant chapels rather than the Established Church. Indeed, the interior of the church was described as having the appearance of an ‘old Presbyterian place of worship’ in 1873. The church was quite unlike most Anglican churches in that it had no central aisle and instead had a central column of pews, with aisles each side, similar to a nonconformist chapel. The three-sided gallery and the boarded nave ceiling also contribute to this chapel-like appearance.

There have been many refurbishments made to the church in its history. Unfortunately, it is not entirely clear what the full extent of the works entailed. In July 1851, the church reopened following a period of renovation in which ‘considerable alterations’ were made. The church was re-pewed to increase the accommodation and to ensure that the church took on a more uniform appearance. Other unspecified improvements were also undertaken at that time.

The next significant improvements appear to have taken place in 1873 when the chancel was extended and a new organ installed. The Western Mail (19 Sep 1873) records that the improved chancel was ‘extended in a manner quite in keeping with the character of the church, except in the matter of seats, which are of modern pattern’. The chancel was extended 10 feet eastward in order to allow sufficient space for the choir (previously the choir sat in front of the west gallery). The chancel was further improved in 1900 and was redecorated and had new windows installed.

Further improvements were made in 1882-1884. The 1880s extension was undertaken by local builder John Morgan and involved roof improvements, reseating work and general renovation. The churchyard was extended at the same time. Twelve new windows were installed in 1879-80. An ‘antique’ pulpit, which was inconvenient and had to be accessed through the use of a step ladder, was replaced in 1886. The 1882 extension was funded through local subscription. A fundraising bazaar was held in August 1882 and was well-supported, with patrons including the Duke of Beaufort, the Marquess of Abergavenny, Lord Tredegar, Howard John Kennard, Arthur Challis Kennard, Henry Martyn Kennard, John Kennard, Edward Kennard, Robert William Kennard, Samuel Laing, Edward Pritchard Martin, John Allan Rolls (later Lord Llangattock), their wives, and many others.

The 1805 Act provides some reference to the seating arrangement and states that the churchwardens should ‘allot and set apart from the Pews and the Seats in the said Church or Chapel, for the use of themselves and the inhabitants of Blaenavon… leaving one-fourth part at lease of the area of the said Church unappropriated for the general use and accommodation of Persons attending Divine Service in the same’. In terms of ownership of pews, if some were privately owned, then it is likely they would have been owned by the ironmasters and senior managers of the works. In any case, pew rents appear to have been introduced after the re-pewing of the church in the early 1880s. It brought in approximately £20 pa during the 1880s but rose to over £30pa during the 1890s.

By 1891 new demands were being made for church extension, owing to the population growth within the parish. The main focus was the erection of a new church at Coed Cae (St. Paul’s Church) and a mission church at Garn yr Erw (St. John’s Church), which both opened in 1893. Rather than enlarging the existing parish church, new buildings were now seen as a necessity. Improvements were also identified in the parish church, including better ventilation systems, further alterations to the chancel and the enlargement of the churchyard. A fundraising bazaar had been held in the Endowed Schools in August 1888 and similar events were carried out in the same place in August 1892 and included a special lecture by Edward Kennard, who spoke about his travels in Norway.

The church was again closed for renovations in 1900, when services had to be held in the Endowed Schools. This renovation involved painting the nave with a soft terra cotta shade, with dark shading under the cornice. Text was painted over the chancel arch and emblems were added. The walls of the chancel were decorated with elaborate ornamentation. A new chancel window was also added. Gas lighting was also installed by Charles White, manager of the Blaenavon Gas and Water Works.

Parish of Blaenavon with Capel Newydd

When St. Peter’s Church was built in 1804-05, Blaenavon did not become a parish in its own right. The Act of 1805 made provision to ensure the rights of the Llanover parish were protected. The endowment of St. Peter’s Church was ensured by Hill and Hopkins through the provision of an annuity of £20 derived from a farm and lands (Y Persondy) in the parish of Llanfoist at Garn yr Erw. All tithes etc. would still be payable to the St. Bartholomew’s Church, Llanover, and if any marriage, christening or burial was to take place at St. Peter’s the minister’s fee would be doubled, with half the fee going to the Vicar of Llanover.

Following the consecration of St. Peter’s Church, the Reverend James Jenkins was appointed perpetual curate. He also collated to the Perpetual Curacy of Capel Newydd by the Bishop of Llandaff in 1821 and became Rector of Llanfoist in 1827. He left Blaenavon in 1841 and was succeeded as Perpetual Curate of Blaenavon (and Capel Newydd) by the Reverend John Jones, formerly of Trevethin.

From the 1840s to the 1860s, the town of Blaenavon began to emerge. The population increased considerably and the upper part of the parish of Llanover, in which much of Blaenavon town was situated, was more populous than the lower part of the parish. It had in effect became a distinct and separate entity. Challenges were also emerging for local government and administration and it was clear that industrial Blaenavon was very different to rural Llanover. At a Meeting of the Board of Roads, held at the King’s Arms Inn, King Street, Blaenavon, in 1859, local representatives took advantage of the provisions of the Local Government Act 1858 and took steps to form a new Local Government Board for the Blaenavon district, which were approved in January 1860. These reforms were made in tandem with the proposals to create a new Ecclesiastical Parish for Blaenavon and it was agreed that the new parish and local government district should share the same boundary.

By an Order of the Queen in Council dated 27 August 1860, the Perpetual Curacy of Blaenavon was created an Ecclesiastical Parish, effective from 1 September 1860. The new parish was formed from the outlying lands in the parishes of Llanover, Llanfoist, Llanwenarth and Abersychan (which itself had been created out of the old parish of Trevethin in 1844). The new parish extended from the source of the Afon Lwyd at Garn yr Erw to the railway station at Cwmavon, extending for approximately one mile on both sides of the river Church rates raised in the new parish were to no longer go towards the benefit of the mother churches. Similarly, all marriages carried out in accordance with the rites and ceremonies of the Established Church would henceforth need to take place at St. Peter’s Church, Blaenavon, otherwise they would be considered illegal. The Reverend John Jones became the first vicar of Blaenavon and his home, Glantorfaen House, became the town’s first vicarage.

Following the closure of Capel Newydd in 1861, the ‘Perpetual Curacy of Blaenavon and Capel Newydd’ was formed in 1863. In 1885, part of the parish of Aberystruth at Milfraen was also annexed to the local government district and the ecclesiastical parish.